In a previous post, we explained how the Constrained Application Protocol (CoAP) enables us to exchange data between nodes in the Internet of Plants using a request/reply cycle similar to that of HTTP.
To do this, we need both of our node types– plant nodes and display nodes– to be able to send, process and answer CoAP requests.

This post explains how to implement a simple CoAP server on our plant nodes, which run RIOT, using RIOTs microcoap package.

Since no special modifications to the code are needed to get it to run on RIOT, this guide may also be useful to you if you’re looking to run microcoap on Linux or your Arduino.

We’ll also show you how to test your microcoap server with Copper.

This section will walk you through the implementation of a very small microcoap server. In the end, you’ll have a server which is able to answer GET requests to /riot/board, and (hopefully :) ) the knowledge how to extend this server at will. This guide is based on the code of this example application. It might be useful to keep an eye on it as a reference.
Let’s go through the code file by file.

Note: this part is only relevant if you use RIOT.

Even though the RIOT wiki has a more in-depth explanation of RIOT Makefiles, there is one thing that you shouldn’t overlook:
Each RIOT Makefile specifies the board the application should be built for using the BOARD parameter. In the example Makefile, you’ll find the following line:

This means that your application will be built as a native applications. the application and the RIOT instance it is running on will run inside a thread on your Linux OS, which is great for testing and debugging. Once you’re ready to flash your code to your actual board, substitute native with the name of your board (in our case samr21-xpro) and flash it.

Please note that microcoap currently doesn’t have a nice API to create requests on its own (i.e. without being triggered by a client). It can be done, though, but that’s for another blog post.

As explained in our previous post, a CoAP server answers requests which are directed at the resource of a certain endpoint (namely, the IP address of our server). Our server will thus have to define the resources which can be requested, and how to handle these requests.

Probably a bit confusingly named, microcoap handles this with the help of an array of type endpoints.
This array should not contain information about any endpoints (i.e. IP and port pairs), but information about your resources.
You will have to create a const coap_endpoint_t endpoints[] and fill it to match your desired endpoints and how they should be handled. Let’s look at this step by step.

In microcoap_server/coap.c, you will find that the example application has created an array of coap_endpoint_t called endpoints:

For simplicity’s sake, we’ll only be looking at the second entry from now on.

Now, if we look at the coap.h file of the microcoap code, we can see that a coap_endpoint_t is defined as follows:

This helps us understand the entries of our endpoints[].

a few lines up, so we know that this entry handles a path which contains two segments, namely /riot/board.

microcoap supports a maximum segment number of two out of the box. If you need more, you’ll have to adjust MAX_SEGMENTS in coap.h.

If our CoAP server receives a request which matches this definition, i.e. a GET request to /riot/board/ with the Content-Format set to 0=text/plain, the handle_get_riot_board() function will be called, which handles the processing of this request and the creation of a response, if necessary. Let’s look at this function in detail:

Whenever a callback function that is defined in an coap_endpoint_t is called, it is provided with parameters. Let’s look at the ones that may be important to you.

Because handle_get_riot_board() handles a GET request, we want this function to answer with a response value. So we’re copying the current BOARD name into response[].
Then, we use coap_make_response() to build our packet:

When this is done, handle_get_riot_board() returns the response code that coap_make_response() gave us, so that main.c knows if our endeavors were successful.

As you can see, our response payload in this example is very simple. In a real application, however, this might be where you’ll read out sensor data which has been requested.

Note that microcoap will recognize the endpoints array by its name. This will not work if your array is called anything but endpoints!

Now, let’s see how we can use our newly-defined endpoints to handle requests.
For an in-depth explanation of the structure of a RIOT application, please see this RIOT wiki page

You’ll see that microcoap_server_loop() starts with calls to conn_udp_create() and conn_udp_recvfrom(). This is RIOT-specific code to set up and receive from a UDP connection and can be substituted with regular POSIX socket code, if that’s what you need.

The interesting part starts at line 60:

checks whether the packet we received is actually a valid CoAP packet.

After the packet passes this test, it is passed to coap_handle_req(). If the method and path of the request match one of the method-path combinations we specified in endpoints[] earlier on, the coap_endpoint_func handler provided along with them (in our case, this is handle_get_riot_board) will be called automagically. The resulting response packet is written into rsppkt.

Now, the response packet rsppkt we just built is serialized and written to buf so that we can send it. Note that we also pass a pointer to rsplen: This doesn’t just tell coap_build() the size of our buffer. When coap_build() is done, it will have written the actual CoAP packet size to rsplen. This way, we can avoid sending bogus data which fills the rest of buf by providing our send function with rsplen as the buffer size indicator:

And that’s it! We’ve now successfully received, processed and answered a CoAP request.

Now that our microcoap server is up and running, we’ll want to feed it requests and see if it behaves as expected. This section will guide you through the setup of a simple environment which lets you do this. (Despite the somewhat misleading terminology, this section is not about thorough, automated tests.)

Using Copper as a test client

Copper, is a Firefox plugin that turns your browser into a powerful CoAP client.

If your microcoap application is running on RIOT native, there are some extra hoops to jump through before you can test it with Copper (in case you don’t use RIOT, skip this subsection).

Enter the following into your /etc/radvd.conf (if it doesn’t exist yet, create one):

(you can use radvd -c to check for syntax errors)

Then, run the RIOT binary as usual:

Note that the output listing all configured interfaces contains a globally scoped
address, which you can now use to reach the RIOT instance via Copper.

After you’ve installed the Copper plugin in your Firefox browser and successfully set up radvd, start the microcoap application:

Note the address marked as “scope: global”. This is the address you’ll use to communicate with your microcoap server using Copper.

If the above doesn’t work, try manually adding a Global address to the tap0 interface:

Now, you can enter

Your browser window should look similar to this:

Now you can click the big green GET button. This will send a GET request to the resource foo/bar/ of our microcoap server. Our server should reply with a 2.05 Content message containing the payload native, which Copper should display in the big grey box, similar to the “1337” in this screenshot: 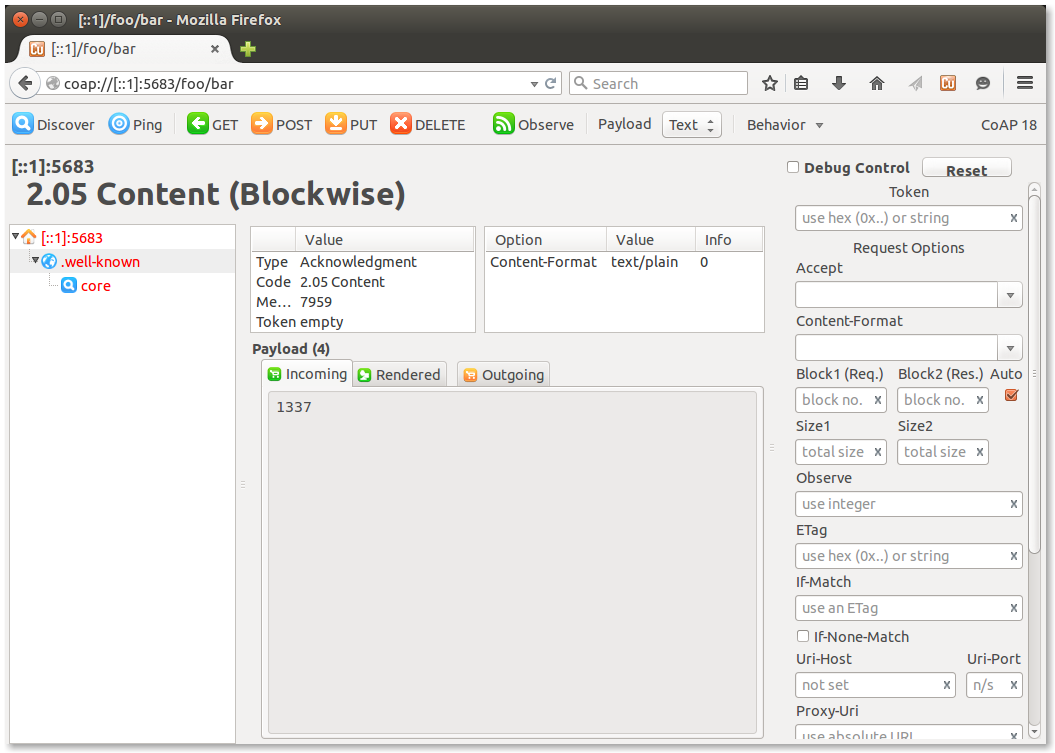 When all of this works, you’re ready to go. Extend endpoints[] with your own methods and paths, create response payloads that actually make sense and build awesome stuff with your new CoAP server. Happy hacking!